This afternoon we saw what was without doubt the best movie among all of the end of year releases that we have seen up to this point, director Theodore Melfi's "Hidden Figures".  This movie tells the true story of the role that three African-American women played in the American space program back in 1961, the time when the USA was struggling to catch up with the USSR in succeeding in manned flights into outer space.  The women are played by (as pictured above) Janelle Monae, Taraji P. Henson, and Octavia Spencer.  All are terrific in their roles, but first among equals is Henson as the mathematical genius whose work and contributions were critical to NASA.  Also, featured in key roles are Kirsten Dunst, Jim Parsons, and Kevin Costner.  No longer the dashing leading man, Costner has now become a character actor, and he is terrific in "Hidden Figures".

We came away from this movie with two thoughts.  One, how is it that this story was never told and is so unknown, and, two, how shameful it was that we once lived in a country that required separate restrooms, segregated buses, separate water fountains, and even separate coffee pots in offices.  Two great scenes: When chief engineer Costner, clueless up to this point, realizes that he is losing one of his best workers for large portions of the day because she has to leave the building in order to use the "colored ladies" bathroom located in another building, and a scene in a now integrated rest room between Spencer and Dunst.

I can't recommend this one highly enough.  An unequivocal Four Stars from The Grandstander for "Hidden Figures".

On the subject of movies, I recently re-watched this one again: 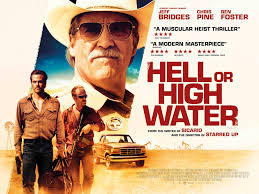 After watching the Blue-ray two days ago, I went back into The Grandstander archives and saw that when I wrote about seeing it in August, I rated it at Two and One-half Stars, to which I said to myself "What was I thinking???"

"Hell or High Water" is easily one for he best movies of 2016, and deserves a rating of at least three and one-half stars.  Jeff Bridges is utterly fantastic in his role as the crusty old soon-to-retire Texas Ranger, and the final scene of the movie between him and Chris Pine is fabulous.

"Hell or High Water" has been available on DVD for some time now, and I am sure that it can be streamed easily enough on the various services out there.  See this one as soon as you can.
Posted by Bob at 4:19 PM